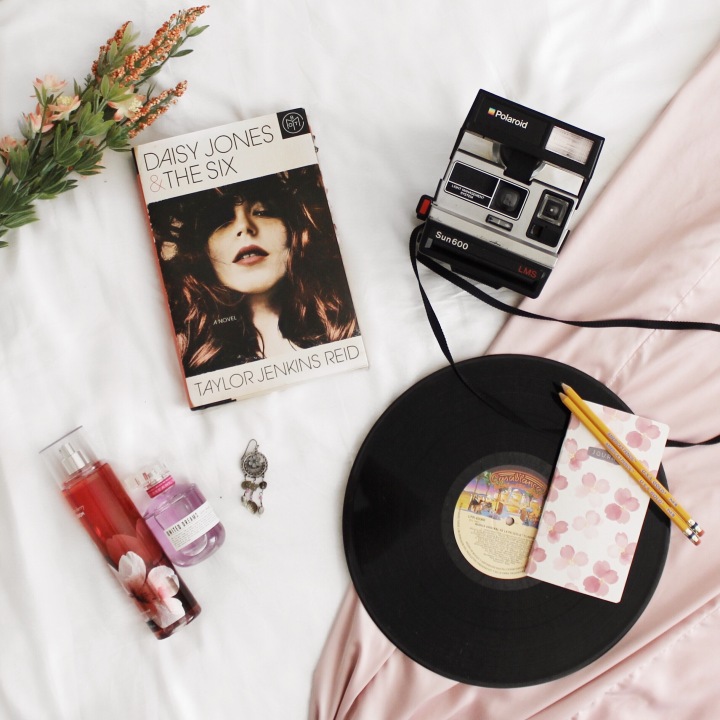 “And when you start to feel real success… you have to stop and ask yourself if you think you really deserve it. Anyone that isn’t a complete asshole will come up with the answer ‘No.’ Because of course you don’t. When guys you grew up with are working three jobs. Or they’re lost overseas… Of course you don’t deserve it. You have to learn how to reconcile those two things. Having it and not deserving it.”

It’s no secret this is the buzz book of the moment. After reading it I can definitely see why. I mean it’s been a few days and I still find myself thinking about it every hour of the day (that’s not an exaggeration). Rarely do books impregnate me, yet this one found a way.

However, the reasons why have led me to dock a couple of stars. See, I listened to this via audiobook. The audiobook had a full cast of talented voice actors, so it wasn’t difficult for the book to come alive. If you didn’t already know Daisy Jones & The Six is a mock biography of a famous rock band told entirely through dialogue. As a result, everything is toldinstead of shown. Since I listened to it I didn’t have a problem with this, but had I read a physical copy I’m sure this would’ve come off as incredibly stale and boring.

I’ve listened to great audiobooks before such as The Divinersand The Seven Husbands of Evelyn Hugo, but even then I could tell that if I’d chosen to read it physically I would’ve still given them both five stars. That’s not the case with Daisy Jones & The Six. I’d go as far as to assume that those who’ve praised this book read it via audio, and those who found it boring read it physically. This is a bit problematic to me, because it’s not a voice actor’s role to bring the words to life but the author’s. In fact, it makes me think that Reid should’ve written this as a manuscript if the intention was for someone else to liven things up.

Furthermore, I think part of the reason that these characters feel so real is because they are partially based off of real people. Honestly, it kind of frustrates me when someone says “I googled them and then got sad when I remembered they weren’t real” Because…they are. Just like Evelyn Hugo is pretty much Elizabeth Taylor, Daisy Jones & The Six is pretty much Fleetwood Mac. I know some people are sensitive about what I’m saying, but honestly just google either wikipedia and you’ll see the differences aren’t that stark.

It’s not that I have a problem with Reid taking “inspiration” from real life, but in this book it feels particularly obvious she was copying the formula to her previous book.

1). Main Character must be famous and based off someone real.
2). The narrator is an average Joe given the chance to interview said MC.
3. Plot twist! Average Joe’s and MC’s lives are connected.

Except that with The Seven Husbands of Evelyn Hugo it made sense. Here, it just feels too methodical and inorganic. It’s like there’s so much pointless build up of sex, drugs, and rock & roll only so we readers can arrive at a pretty mild conclusion. It made me question what the point of the novel was or even the characters. Like Karen Karen, Graham, ect. (I can’t remember the others’ names that’s how pointless they were) what did they contribute to the novel?

Overall, I’ve heard a lot of things about this book being nuanced, feminist, complex, but honestly? Where? I don’t see it. It’s not a bad book but it’s just simple entertainment. Everything is said in a crude and straightforward manner, and even then I couldn’t tell what the book was trying to be. Was it a star crossed lovers romance? Was I supposed to be rooting for Daisy and Billy to get together in the end? Because I didn’t. Truthfully, everyone, with the exception of Camila, was annoying as hell. I’m not trying to deter anyone away from this book. I definitely think it’s a fun mind-numbing listen, but you’ll have to forgive me when I say this should’ve probably just been a show.

looking for something specific?

long time no photo dump 🌷
Surprise! I have a shop and it’s now officially open so link in my bio!!
rough times mean you get bangs and read an Acevedo book: I don’t make the rules.
purely taken because it’s the last day of April and this is my favorite calendar page 💫
finally got to mess around with some paint ✌🏼 .
just a blurry bean with one of her favorite books 🌱

long time no photo dump 🌷
Surprise! I have a shop and it’s now officially open so link in my bio!!
rough times mean you get bangs and read an Acevedo book: I don’t make the rules.
purely taken because it’s the last day of April and this is my favorite calendar page 💫
finally got to mess around with some paint ✌🏼 .
just a blurry bean with one of her favorite books 🌱
Loading Comments...
Comment
×
%d bloggers like this: